... and the U.S. threatens to take away Ahmadinejad's favorite blanky. From Fox News:

"The State Department has not said publicly what type of punishment it might seek. But U.S. and European officials have indicated they might push for travel restrictions on Iranian officials or a ban on sale of dual-use technology to Iran."

Travel restructions!! Oh, the humanity.
Posted by Geek Girl Blonde at 11:58 AM No comments:

Shortly after the arrest of John Mark Karr in connection with the JonBenet Ramsey murder case, talk show host Neal Boortz said that Karr was a poseur and the case would fall apart within a week.

He called it! He's also calling it The Most Expensive Taxpayer-funded Jailbreak, and I tend to agree with him.

Yet another incident on an aircraft:

I hate to even think this, but do you suppose that the jihadis are getting smart, creating non-events so that no one will believe it when it's the real thing? Anyone? Anyone?
Posted by Geek Girl Blonde at 12:06 PM 2 comments:

For reasons that are up for debate, coverage of missing Fox News journalists Steve Centanni and Olaf Wiig has been scanty. Blogger Michelle Malkin today asked other bloggers to post about Centanni and Wiig to let them and their families know they are not forgotten. And I'm glad to oblige.

O merciful Father, who has taught us in thy Holy Word that thou dost not willingly afflict or grieve the children of men: Look with pity upon the sorrows of thy servants for whom our prayers are offered. Remember them, O Lord, in mercy, nourish their souls with patience, comfort them with a sense of thy goodness, lift up thy countenance upon them, and give them peace; through Jesus Christ our Lord. Amen.
Posted by Geek Girl Blonde at 9:30 AM 1 comment:

Bush: U.S. Assistance Is Flowing to Lebanon
Don't get me started.

Officials: Iran Turns U.N. Inspectors Away From Nuclear Site
I'm sure no one saw that one coming.
Posted by Geek Girl Blonde at 12:15 PM No comments:

Cheap fun again with the online translator at Alta Vista's Babel Fish. I translated Carter's quote below into Japanese and then back into English ... or "Engrish," I should say.

"The basic principle person of christianity possesses the unique relationship with the God which is believed, that and their thoughts being prerequisite of thought and God of God of specific problem. Therefore, with definition, it meaning that they speak because of God, originally by mistake it is anyone whom it does not agree to those it does. And the following step is as follows: The people who are not agreeable with those life are not important the sea urchin, originally being inferior in the extreme case, -- the way the basic principle person of some person in your opposite person who when is in the world -- that it is made the auxiliary human.

"As for another thing basic principle person him himself or her herself being to be sign of the equality where negotiation process itself is meant, it is not to be able come accompanying in order to negotiate with the people whom it does not agree to those. For example and so past fundamental starting from history and there is a policy of the thing which refuses the fact that you speak to someone who is in the mismatch where those which are strong exactly in this management. So these are a kind of thing which causes worry in me. And, naturally, the basic principle person the basic principle person the mistake. Exactly it is impossible and to approve the fact that you can do it is possible to make the mistake which is not believed therefore the time we permitting the agony of the prisoner of Guantanamo or Abu Ghraib."
Posted by Geek Girl Blonde at 5:03 PM No comments:

I shouldn't be surprised anymore by Jimmy Carter's breathtaking idiocy, but I am. Carter takes a few quantum leaps of logic and gives us this gem as quoted in a Der Spiegel interview:

"The [Christian] fundamentalists believe they have a unique relationship with God, and that they and their ideas are God's ideas and God's premises on the particular issue. Therefore, by definition since they are speaking for God anyone who disagrees with them is inherently wrong. And the next step is: Those who disagree with them are inherently inferior, and in extreme cases -- as is the case with some fundamentalists around the world -- it makes your opponents sub-humans, so that their lives are not significant. Another thing is that a fundamentalist can't bring himself or herself to negotiate with people who disagree with them because the negotiating process itself is an indication of implied equality. And so this administration, for instance, has a policy of just refusing to talk to someone who is in strong disagreement with them -- which is also a radical departure from past history. So these are the kinds of things that cause me concern. And, of course, fundamentalists don't believe they can make mistakes, so when we permit the torture of prisoners in Guantanamo or Abu Ghraib, it's just impossible for a fundamentalist to admit that a mistake was made."

Ah. The old canard that holding absolute beliefs naturally leads to treating other people with indignity and disrespect. What, the Abu Ghraib guards were all Sunday School teachers? They were getting regular communiques from Jerry Falwell? They looked at their WWJD bracelets and decided to sexually humilate the prisoners?

Carter is being ridiculous. If fundamentalism per se were a sure route to violence and inhumanity, then we'd be dealing with a terror wave of militant Baptists and radical Amish.

But if you need a good laugh, read the entire story.
Posted by Geek Girl Blonde at 4:26 PM 4 comments:

And it's not her one surviving parent. (I didn't know until reading this story that JonBenet's mother, Patsy Ramsey, succumbed to ovarian cancer last month.)

If this shakes out, the entire country -- myself included -- will owe John Ramsey one big fat apology. At least perhaps now, justice will be served.
Posted by Geek Girl Blonde at 4:04 PM No comments:

Rich would be appalled.
Posted by Geek Girl Blonde at 12:14 PM 1 comment:

It's a nasty, insane world out there.

The GGB engaged in some serious retail therapy this week to soothe her agitations. Monday night was "blingtherapy." This involves going to cheap accessory stores such as Claire's or Icing and buying totally unnecessary things that sparkle, like stick-on rhinestones for your cell phone and a pink watch. Girly fun for less than $15.

Last night was "techbrowsing." My sweetie fiancé Rich and I cruised Circuit City and lusted over the new breed of palm-sized, completely portable XM Radio receivers. (We both are XM fanatics.) We finished off the night with a quick trip through World Market, browsing for Zen-esque decorating items, and devoured the city's best sushi at Sumo in Patton Creek.

However, we didn't see anything quite as cool as this: MainGear's Prysma Pyramid PC

Ahmadinejad -- what a joke

Iranian president Mahmoud Ahmadinejad is not joking when he talks about eradicating Israel, and in that sense, he should be taken seriously. But when it comes to being a spokesman for a modern-day Third Reich? His performance on 60 Minutes was, in a word, laughable.

RealClearPolitics' John McIntyre wrote about the Iranian president's interview with Mike Wallace: "I found his answers to Wallace extremely cunning, crafty and dangerous." Dangerous, yes. Cunning and crafty? To a 12-year-old, maybe. Ahmadinejad's response to Wallace's questioning about his glorification of martyrdom: "You should understand the definition of martyrdom to appreciate what I've said."

Oh, give me a break. Bill Clinton tried that with the word "is."

Throughout the interview, Ahmadinejad was evasive and coy. He feigned cluelessness, pretending not to comprehend the gist of some of Wallace's more pointed questions. At other times, it seemed like he was reading from Cindy Sheehan's crib notes. And he was consistently disingenuous.

Mike Wallace has been criticized for supposedly soft-balling with Ahmadinejad. In Wallace's defense, he tried his best to wrest straight information from the Iranian president's torqued responses without actually jumping up and strangling the guy, which I found myself wanting to do repeatedly throughout the interview.

But in all fairness, he was slightly more convincing than Baghdad Bob.

Bottom line, it alarms me that such a rank amateur, schooled as he is in the art of seventh-grade debating methods, could have an entire nation under his sway.
Posted by Geek Girl Blonde at 9:31 PM No comments:

Begging for a caption 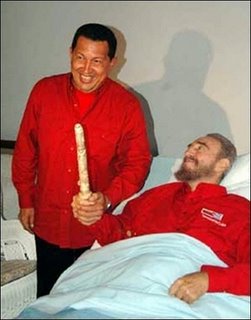 I don't know what they're holding, and I'm not sure I want to. AFP merely refers to it as a "birthday present" to Castro.

Which frightens me.
Posted by Geek Girl Blonde at 4:07 PM No comments:

Will the Middle East implode?

A quick note: My prayers and thoughts go out to Fox News reporter Steve Centanni and his photographer, Olaf Wiig, who've been reportedly captured by unknown terrorists (not militants) in Gaza.

My question of the day is: Who is left in Lebanon? Who is left besides the Hezbos and people who are either too poor or too brainwashed to get the heck out of dodge?

People might think Birmingham is a cracker town, but you'd be surprised how many entrepreneurs, business owners and professionals here are not Scotch-Irish. I know a bunch of them. They're Cuban and Ecuadoran and Iranian and Lebanese and from a hundred other countries on Earth where twisted and evil governments can't deal with people who are self-reliant, intelligent and resourceful.

I'm no political scientist, but I don't see how you can have a stable society without a robust middle class. And dictatorships tend to purge their own middle classes, either through deliberate oppression or by making things so intolerable, the smart and resourceful people leave.

(I am not saying the masses of Iran or Cuba are all dupes or dummies, but good grief, why would you want to live there?)

I keep waiting for socieites like Iran to reach critical mass where there aren't enough people producing and creating -- they're all oppressing or being oppressed -- and the society just disintegrates. How long can something like that last?
Posted by Geek Girl Blonde at 3:39 PM 1 comment:

And now, the shoutin' 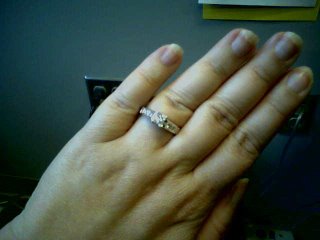 As I blogged awhile ago, as far as Rich's and my engagement was concerned, it was all over but the shoutin'.

Well ... the shoutin' has commenced! Behold, the Bauble.

Rich popped the question at one of our favorite restaurants last night before a bellydancer friend, who was performing, and a bevy of total strangers. :) (Who sweetly wished us well. One guy even snapped a few digital photos of us and offered to e-mail them to Rich.)

It was sweet, romantic and totally overwhelming! Today, I've enjoyed admiring my left hand and showing off the Bauble to coworkers, people in the elevator, and all of you wonderful GGB readers.

By the way, that's a princess-cut center stone with princess-cut, channel-set diamonds on each side. What you can't see is a nice touch: tiny round diamonds in a circle around the base of the center stone, crown-style. ;-)
Posted by Geek Girl Blonde at 3:28 PM 2 comments:

I am not making this up

"Britain's biggest theme park has called off the country's first 'National Muslim Fun Day' because of lack of interest, the park said Wednesday.

"Alton Towers in central England was to open on September 17 for Muslims -- with halal food, a strict dress code and prayer areas.

"Music, gambling and alcohol were to be banned for the day and theme park rides such as 'Ripsaw,' 'Corkscrew' and 'Charlie and the Chocolate Factory' all segregated by sex."

Strict dress code, prayer, no music, no gambling, no alcohol and no boys and girls playing together. Sounds like a fun day to me. :)
Posted by Geek Girl Blonde at 4:04 PM 1 comment: