Coincidence? You be the judge.

Just turned on the TV, and simultaneously, The Learning Channel was broadcasting Tattoo!: Beauty, Art and Pain and, on the Discovery Channel, The Human Canvas: Sacred Skin. And A&E is plugging the heck out of their upcoming dramatic series: Inked.

Never fear, the GGB is here!

My electricity, however, went out at around 4:45 p.m. Sunday (WAY before any of the bad stuff hit) and was not restored until nearly 9 a.m. yesterday. (Time to clean out the fridge! Everything must go!)

After I got home from work yesterday, it took awhile for me to figure out how to reset the LAN ... then I got wrapped up in a phone call with a friend from Phoenix ... and I had to capture some home video I shot over the Fourth of July of my irrepressibly cute niece ... you get the picture!

I think we really had an (affirmative) answer to prayer, folks. Dennis was no cakewalk, but things could have been catastrophic, and they weren't. Of course, some folks did get hit hard, and to them the GGB extends her thoughts, well wishes and prayers.
Posted by Geek Girl Blonde at 9:35 AM No comments:

Rain continues here in the B'ham area. We are simultaneously under an Inland Tropical Storm Warning and a Tornado Watch, and one local meterologist has advised that no one should be on the roads between 9 p.m. tonight and noon tomorrow.

Looks like the Alabama Gulf Coast will be spared the worst of Dennis -- he has made landfall well east of the state, which means the prevailing winds will be blowing water away from the Gulf. Still, this is no cakewalk for anyone near Dennis, and we all feel for the Floridians who will get the brunt of this storm.

Oddly enough, because of the change of storm track, the TS Warning for Birmingham may be upgrade to an Island Hurricane Warning later today!

But the GGB is wearing her favorite storm tracking shirt and is ready for anything. More later ...
Posted by Geek Girl Blonde at 2:26 PM 1 comment:

Orange Beach
Panama City
Posted by Geek Girl Blonde at 12:58 AM No comments:

Dennisblogging, part 6: This is not good

It's been raining for about three hours. It began about 10 minutes after I took photo #2 below. Already, parts of Jefferson County are under a flash flood warning.

The latest forecast track takes Dennis right over the Florida-Alabama line. As Dennis heads northwest, that means southern and central Alabama will be on the east side of the hurricane -- the side that gets the more powerful inbound winds and the lion's share of the rain.

There goes the first boom. The sky is getting blacker by the minute. (Note the time stamps on the photos, but add an hour. My camera apparently doesn't automatically update when we switch to Daylight Saving Time.) 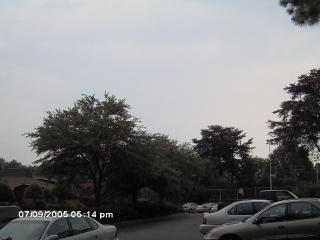 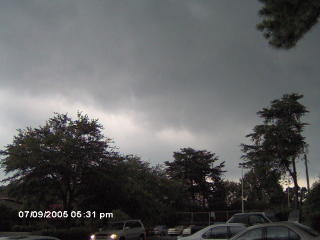 Posted by Geek Girl Blonde at 6:35 PM No comments:

So far, the catometer (cat-o-meter) looks good vis a vis the approaching Dennis. Both of mine look as if they could care less: 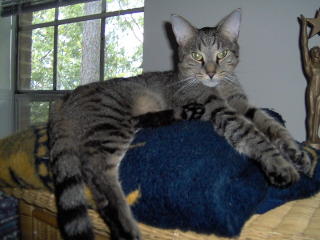 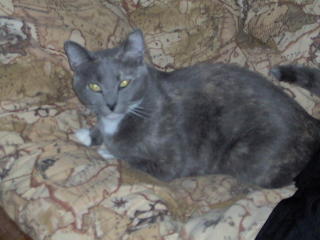 If anything, I think they look annoyed that I interrupted their afternoon naps. Sorry!
Posted by Geek Girl Blonde at 12:13 PM 1 comment:

Hurricane Dennis. We don't like him here at GGB Central. Here are some guys named Dennis we do like:

Dennis Quaid. If you're a sci fi fan and haven't seen Frequency, check it out.

Dennis Miller. What can I say? This guy's a comedic genius and a conservative. (Kinda handsome, too.)

Dennis DeYoung. Never met a high note he didn't like. I'd "Come Sail Away" with him any ol' day.
Posted by Geek Girl Blonde at 11:31 AM No comments:

Ooops ... wrong Dennis. But while we have him here, let's gaze at him for a moment before going to ... 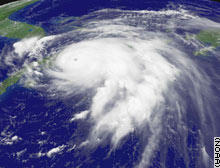 It's Saturday morning, 10:30 a.m., and already things are beeping at me. Between the weather alerts I get on my cell phone from our local ABC affiliate to Weatherbug chirps on my desktop, Hurricane Dennis action is already heating up. (Speaking of heat, it's already 91 degrees here in the Magic City. Yikes!)

Can you tell I'm a weather nut? Did you have any doubt?

My area already is under an inland tropical storm watch and a flash flood watch. I-65 between Mobile and Montgomery already has been relaned for all-northbound traffic to accommodate the refugees.

My heart breaks for those people. They've already been through hell with Hurricane Ivan back in September. I haven't been to the Gulf since summer '04, but I read yesterday that about a third of the condos in Gulf Shores and Orange Beach still are uninhabitable. Another hit, and it could be a VERY long time before the Alabama Gulf Coast fully recovers.

Our Gulf Coast is one of the real treasures of living in this state. The old-world flavor of Mobile ... the unbelievably charming Fairhope on the opposite side of Mobile Bay ... the dazzling white beaches of Pleasure Island. The thought of losing any of it makes this Alabama girl very, very sad -- along with pretty much all of the four million people in this state.

For most Alabamians, the Gulf Coast is a treasure box of sweet memories. I'll never forget a weekend I spent in Fairhope about 10 years ago to attend the wedding of two church friends. The bride was originally from Fairhope, and what a cool place to call home. EVERYTHING in that town of about 10,000 is pretty. Even the trash bins are hidden within clean, white wooden boxes with impatiens planted on top.

Three girlfriends and I made the long trek down after work one Friday night. We'd rented a cottage at a B&B called Villa Whimsy. Before settling in, we stopped at the famous Old Bay Steamer for piña coladas and fresh seafood. We sat along the restaurant's built-in aviary and watched chartreuse and aqua birds hop and flutter.

Later -- very tired and very full -- we found Villa Whimsy and checked into what I can only describe as a Jimmy Buffet fantasy: The walls were covered with bamboo up to about six inches from the ceiling. The rest of the walls and ceiling were painted midnight blue with gold stars. The king-sized bed had ship's rope wrapped around the four posters. The TV sat on what looked like an old ship's chest with Mardi Gras beads spilling out.

We all just looked at each other and smiled.

The next morning, our hosts prepared a delicious breakfast and served it to us on the deck that looked out onto Mobile Bay. The afternoon wedding was at an old church in town, the reception at the bride's home, "Peppermint Cove." (EVERYTHING in Fairhope has a cute name.)
I could give you several more stories ... the week I spent on Dauphin Island on a school trip in 7th grade ... a thunderstorm witnessed two years ago from the deck of a condo in Gulf Shores ... more than one good meal eaten at landmarks such as Hazel's, Coconut Willie's and Live Bait.

I'm reminded of a few lines from a Jimmy Buffett tune, "One Particular Habor":

I wasn't able to make my annual trek to the Coast this year because of all the moolah I had to shell out for the Big Move.

I just hope there's something waiting for me when I finally return.

Posted by Geek Girl Blonde at 11:17 AM No comments:

Hurricane Dennis, that nasty little bugger, is about to stir up trouble for us Alabamians. And yes, even Birmingham -- some 300 miles from the coast -- can get clobbered when you have a hurricane this strong headed straight for you.

I am deeply concerned that our beautiful Gulf Coast, still torn up from September's Ivan, cannot handle another battering. In fact, if Dennis remains a category 4 or -- shudder -- becomes even stronger, this could be catastrophic.

Meanwhile, I know more than one person who had trees fall on their homes during Ivan. Lucky me, I didn't even lose power. But if you know anything about Birmingham, you can't go anywhere without running into a tree, and there are LOTS of 'em around the GGB's new domicile. Nevertheless, I plan to stick it out and will hopefully be able to blog from my iPaq downstairs if being in the office upstairs looks a little dicey.

Thanks to an idea by Michelle Malkin, I, too, will keep the Union Jack flying up top today. Scroll down for updates.

God bless the people of the UK.

From The Guardian: If you need information on someone who may have been injured in the attack, the British police have listed this emergency hotline number: 44-0870-1566-344.

UPDATE II: I can't help wondering if it's mere coincidence that this attack occurred the day after London was awarded the next Olympiad. Certainly rubs salt on the wound.

“Rejoice, Islamic nation. Rejoice, Arab world. The time has come for vengeance against the Zionist crusader government of Britain in response to the massacres Britain committed in Iraq and Afghanistan.”

Is it just me, or do all terrorist press releases/proclamations sound like bad dialogue from a third-rate adventure movie shown at 2 a.m.? Maybe Al Quaeda is populated with frustrated screenwriters and guys who flunked their literature classes. Who knows. They all sound like they're trying to write a new chapter of the Quran or something. What miserable, pathetic jerks trying to make something of their miserable, pathetic lives.
Posted by Geek Girl Blonde at 12:07 PM No comments:

Oddly, I had intended to title yesterday's post "I heard the news today, oh boy," but another Lennon tune seemed more apropos.

Now that innocent people are dying on Western soil again, the people who blow up planes, trains and automobiles are "terrorists" rather than "insurgents." (Although I've noticed the AP is scrupulously avoiding the t-word except in direct quotes.) Speculation abounds as to whether this is the job of Islamicists or, rather, the IRA or an anarchist group. (My money's with Al Quaeda, but we'll see.) Tony Blair looked noticably shaken in his press conference. I have no idea if this will galvanize the British against terrorism and in favor of the WOT or if they'll crumple like the Spaniards did. Considering how they've dealt with IRA "insurgents," I'm assuming the former, but I could be wrong. The UK is in a much different situation vis a vis its Muslim population than the U.S., and the UK does not have a large evangelical Christian population, a group that is a primary engine of pro-Israel sentiment in the U.S.

Will be interesting to see how this unfolds. Not to be cavalier, but at least I can get some real news now.
Posted by Geek Girl Blonde at 10:41 AM No comments:

Imagine there's no heaven? No thanks!!

It's these kinds of stories that make you thank -- and question -- God:

Thank God that happened to no kid in my family ... but who would want that to happen to ANY kid?

But I cannot take John Lennon's advice and imagine that there is no heaven, and no religion, too. No, John, I'd prefer to believe there is a heaven where Dylan now is safe in the arms of God and no molester or murderer ever can touch him ... and a hell where an unrepentant child molester and murderer receives justice.

Is it not stories like this that drive home the fact that yes, Virginia, there is such a thing as evil? If we cannot find it in six million Jews murdered or 3,000 executed in burning skyscrapers, can we not find it in the living nightmare of rape and murder committed against children? Can imagination or affirmation or meditation fix that???
Posted by Geek Girl Blonde at 12:56 PM 1 comment: