A University of North Carolina grad plowed into a crowd of students today with an SUV in attempt to "avenge the deaths or murders of Muslims around the world." Fortunately, Mohammed Reza Taheri-azar, an Iranian, is apparently a crummy would-be avenger and managed to seriously injure no one, although several were treated for minor injuries, and he faces nine counts of attempted murder.

The FBI is looking into this as a possible terrorist attack, but I think I have the answer to that question.

Look at this photo of Taheri-azar: 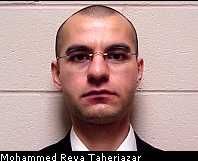 Now, look at these guys: 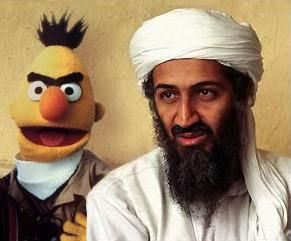 Terrorist link confirmed. Taheri-azar is a deranged Muppet and is in cahoots with Osama.
Posted by Geek Girl Blonde at 4:11 PM No comments:

Spring is coming, trees are starting to blossom and birds are warbling incessantly ...

... but when I read essays such as this one, things turn a little more somber. But the truth shall set you free, and this essay is an absolute must-read for today:

Thrutch: All For One

The article explains why Islamism is picking apart Western society block by block and how our governments are abdicating their sacred duty to protect law-abiding citizens. A particularly choice quote about the Salman Rushdie affair:

"Apart from some feigned outrage, Western governments did nothing but engage in ?diplomacy? and then proclaim that we must ?tolerate? differences of opinion and respect the ?feelings? of those who would murder us. And the result? Rushdie went into prolonged hiding, a Japanese translator was stabbed and killed in Tokyo, an Italian translator was beaten and stabbed in Milan, a Norwegian publisher was shot and severely wounded, 37 people were incinerated in Turkey as executioners burned down the hotel of a translator, and publishing houses and bookstores in the US were firebombed to destruction. Those were just the direct results. Indirectly, westerners learned that freedom of speech only applied if it were directed against lawful, peaceful targets. There would be no protection for discourse about Islam or any doctrine whose adherents backed it up with violence. Moreover, it set the precedent of foreign nations placing bounties on the heads of Western citizens with impunity, which would encourage similar behavior by every ardent fundamentalist given that the tactic had proven effective and without any risk to the issuer."

The article is excellent. Read it; read it now. But I must add one contary comment to the following quote:

"But along with all the advantages of an individual-based society comes one inherent risk. In delegating his use of force, and forsaking adherence to any gang or tribe, each individual is disarmed and essentially helpless should his government fail to act on his behalf."

That's why we have the Second Amendment. No US citizen should ever be "disarmed and helpless" in the face of an incompetent or disinterested government.
Posted by Geek Girl Blonde at 12:55 PM No comments:

Talk about your coitus interruptus

I'm not up on Wisconsin law, but that probably was a hell of a way to sidestep a statutory rape charge.
Posted by Geek Girl Blonde at 2:51 PM No comments:

Why I shop for clothes at Wal-Mart, reason #487

Haute couture is dangerous to your moral and mental health.
Posted by Geek Girl Blonde at 12:07 PM No comments: