Self-reliance: What a concept!

The government is advising people that you cannot always expect the government to pull your arse out of harm's way:

"This save-yourselves approach comes after government agencies were overwhelmed by pleas for help after last year's storms and strongly criticized as not responding swiftly or thoroughly enough to the public need. Now, officials have said repeatedly, only the elderly, the poor and the disabled should count on the government to help them escape a hurricane or endure its immediate aftermath."

Now, if we can just instill this attitude on about 1,578 other issues, we'll be doing good.

A juror who sent Scott Peterson to death row is now his pen pal. She describes him as "charming" and sez he showers her with compliments.

A little Happy Bunny citizen action is in order

I have this magnet on my refrigerator:

I know. It's rude and juvenille. It's also called for after the cosmically STUPID action taken by a majority of the Senate today.

Both of my senators -- Richard Shelby and Jeff Sessions (who's been a GODSEND in all this immigration reform nonsense) -- voted against the steaming pile of poo that was the senate version of the immigration bill. They can keep their jobs, for now.

I just wish I lived in Arizona so I could try to vote that pinhead John McCain out of office at my first opportunity. The idea of McCain getting the GOP presidential nomination makes me want to hurl. McCain versus Hillary. It's like having to choose between having hot coals shoved into your eye sockets and a hydrochloric acid enema.
Posted by Geek Girl Blonde at 11:10 PM 1 comment:

Got some fries to go with that whopper?

"Since the beginning of my administration, the government of Mexico has promoted the establishment of a new system that regulates the movement of people across our border in a manner which is legal, safe and orderly."

This is the same government of Mexico that has published booklets on how to cross the border illegally. Read more:

I am sooooooo sick of this story

Note to Madonna: Aren't you getting a little old for this?

And this woman writes children's books?

Snort warning: Put down your coffee before reading. It's hilarious.

For all we know, the two Saudi men who boarded a school bus in Tampa could have, truly, been confused, thinking they were boarding a public bus.

However, after lying about their nationality and telling about ten different stories about why they boarded the bus, the GGB guesses that these two were up to no good but were too stupid to work out a cover story in advance.

If these guys are jihadis, one only hopes that the rest of 'em are as equally knuckleheaded.
Posted by Geek Girl Blonde at 1:48 PM No comments:

With apologies to Adam Savage 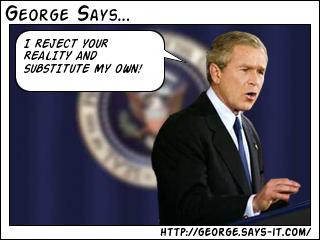 Read David Limbaugh on how politicians and pundits are out of touch with the Amerian public on the illegal immigration issue.
Posted by Geek Girl Blonde at 4:31 PM No comments:

I want me some of these imprinted with Che Guevara's mug.

This should scare you. And piss you off.

Iran eyes badges for Jews - canada.com network
Posted by Geek Girl Blonde at 10:06 AM No comments:

"If I heard the Lord right about 2006, the coasts of America will be lashed by storms."

Robertson also revealed that July will be hot, someone will blow something up in the Middle East, and either Katharine McPhee or Taylor Hicks will win American Idol.

The Taylor Hicks parade was earlier today right outside my office. Got pix and video.

It's gonna take me awhile to come down from this one, folks! I'm a little starstruck.

UPDATE: Photos I took are here. Video is here. (Video should open automatically in Windows Media Player but might take two tries.)
Posted by Geek Girl Blonde at 1:04 PM No comments:

The GGB Quote of the Day

-- Rich at Brain Squeezings on the appeal of asynchronous media
Posted by Geek Girl Blonde at 5:03 PM No comments:

Don't get me wrong. I love our hometown boy Taylor. :) But that is dang funny.

And check this out:

And I really liked tamales, too ...

Dad gummit. I hate it when politics gets in the way of my enjoying all things international.

I shouldn't even have to defend myself this way, but I'm gonna. I really love stuff and people from other countries. Always have. Credit my natural curiosity or the multicultural flavor of Generation X children's shows like Sesame Street, but I've always appreciated the exotic, the unknown, the different.

I was in middle school when I became fast friends with an American-born classmate of Ecuadorian and Cuban immigrant parents. I heard about how the Communists in Ecuador stripped their family bare, and they came to the United States for another chance at a good life. I watched as her mother -- a divorced woman with two girls -- learned English and got an education and leaned on her faith in God and her family's love. I watched as they moved from a small but neat apartment in the local government housing project to a pretty home in a middle class neighborhood. Both of the girls -- who had lived abroad as children and didn't speak a lick of English when they moved to Birmingham -- got excellent grades and went on to college and lives of their own. The American dream at work. Cool!

I also sat amazed at holiday gatherings where the adults congregated in the kitchen, speaking rapid-fire Spanish, while we youngsters watched MTV in the playroom. I ate tamales. I worked on my Spanish. I saw how they loved each other and loved a good party and loved freedom. They were true Americans but with a unique flavor that added to my own experience.

It was an instructive time and part of the reason why I went on to study Spanish in high school and college, earning entry into the National Spanish Honor Society. I learned the thrill of communicating entirely in another language, became friends with a Mexican exchange student, worked on a mission trip in Mexico and gained a deep appreciation for the spirit and character that define what it is to be Latino.

And now, I find myself getting sick.

My Ecuadorian pals came to my homeland, brought something unique to share with us gringos but also embraced the best of what America has to offer. They were American and Hispanic; loyal to their country but fond of the homeland; assimilated but not homogenized.

Now, as I watch angry protests and hear bitter slander of America as a supposedly racist and hostile country ("we hate you, but let us have your money and services"), I wonder what in the world happened. What, was I wrong? There's nothing good about being American? Learning English is tantamount to ethnic cleansing? You can't love America and be true to your heritage at the same time?

The rewriting of the national anthem was a blow to the gut. It makes me ill because it is a repudiation of everything that America -- fallen and erring as it is -- has tried to be for the wanderer and the oppressed. All we ask is that you give as well as take. Give our culture a chance as we are continually lectured on respecting other people's cultures.

I realize that lazy governing and sleazy business practices have put us in this jam. Hey, I've seen Mexico -- and not the touristy part. It festers with poverty and truncated opportunity. If I had a chance to escape to America, work for what amounts to an exorbitant wage by Mexican standards without paying taxes and with free social services to boot, I don't know that I'd turn it down.

Yet I am not willing to just lie back and take this abuse without protest. Call me a racist if you want -- I think I've demonstrated that I'm hardly a xenophobe and probably more multiculturally aware than the average nortemericano. But if I have to just open my wallet and bend over with no protest to avoid being called something nasty, NO THANK YOU. I refuse to piss on my country, and as long as some "activists" are doing the same, you can forget my support.

Two years ago, I was on an airplane next to a Mexican-born American woman in her 60s. We were in Houston, waiting to pull away from the concourse. I noticed she wore a red, white and blue scarf with a Liberty Bell print. True to her culture, she actively engaged me in conversation, telling me all about the grandchildren she was flying to visit. A couple of men a few rows back were chatting in Spanish -- hardly uncommon in Houston. I didn't pay them any particular mind, but she watched them for a moment, turned back to me and sniffed, "English is not that hard to learn! I don't see why they don't learn to speak English."

We talked more, and I learned she was an eager consumer of the American dream and damn proud of it -- but again, hardly homogenized or stripped of her Hispanic flavor. I wonder what she thinks of these protests. I could guess. And I hope she's not the only one.
Posted by Geek Girl Blonde at 5:11 PM 1 comment: