A word from the arch-bitch-shop

This is American bishop Catherine Roskam, who caused a ruckus at the Anglican Church's Lambeth Conference. She basically said that because some men beat their wives, and most of the bishops at the conference are men, then there must be some wife-beaters among the bishops.

"We have 700 men here. Do you think any of them beat their wives? Chances are they do. The most devout Christians beat their wives... many of our bishops come from places where it is culturally accepted to beat your wife."

You know, some women are beyotches. There are an increasing number of ordained women in the Anglican Church, so there must be some beyotches among the female Anglican clergy.
Posted by Geek Girl Blonde at 9:50 PM No comments: 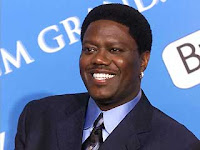 Just saw the devastating news on FoxNews.com that actor/comedian Bernie Mac has died at the age of 50.

My first real exposure to Bernie Mac was his role in Ocean's 11 and his unforgettable "hand lotion" scene. A comedic genius. God rest his soul.
Posted by Geek Girl Blonde at 2:48 PM 1 comment:

Report: American TV has too much naughty sex. Nuh uhhhh!!!

The Parents Television Council (PTC) has just released a report that reveals that American TV is big on extramarital sex and light on married sex.

Knock me over with a feather. Never woulda figured that one out on my own.

I kinda scratch my head over outfits like the PTC. I mean, community advocacy, awareness-raising, yada yada yada, good on them. On the other hand, what's the point? If you are too dumb to realize that the vast majority of television programming is inappropriate for kids, I hope you don't have them. And forget asking Hollywood to look like Kansas. Ain't gonna happen, folks.

The interesting thing is that the report admits that most married Americans have happier and more frequent sex than non-marrieds, so perhaps we're not so swayed by the boob tube. Either way, I do not expect the entertainment industry to reflect my values or teach my values. I just reach for the remote.

For what it's worth, here are the top five family-friendly programs in heavy TiVo rotation at GGB Central:

The GGB Announces Her Candidacy

Read all about it here.
Posted by Geek Girl Blonde at 11:10 PM No comments: